A Complete Guide to Worker threads in Node.js 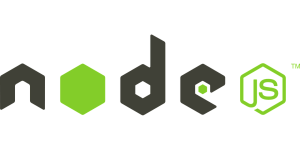 If you are a developer you probably knowÂ  is an asynchronous single thread language but in the background it uses multithreading. However, it is quite problematic to do complex CPU intensive operations.

Workers are a way to execute code asynchronously on a separate thread and create a message channel between them. Worker thread introduced in Node v10.x in an experimental flag (–experimental-worker) and stable in Node v12.x.

You canâ€™t load the worker thread module in Node without the experimental-worker flag.

Worker threads are helpful for complex CPU intensive tasks and not for I/O tasks.Â

Node.js runs on a single thread, and there is only each interaction occurring in turn in the event loop. Node.js exclusively javascript which is single-threaded and hence, Node doesn’t have any solution to implement CPU intensive operation.Â

Some modules like cluster and child_process help to do this task. However, none of these arrangements was generally embraced because of the execution limit. 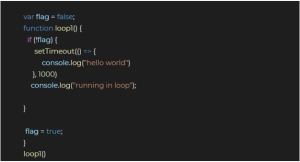 SetTimeout method takes time to execute but the â€œrunning in loopâ€Â  message is displayed immediately. Node.js simply invokes the function but doesnâ€™t block the execution of different bits of code. It will get notified through the callback when the question is done, and we will get the outcome. It will report when the task is completed.

What happens when we are required to do simultaneous extreme stuff? For example, performing complex estimations in memory in a huge dataset. In this situation, the event loop gets blocked and others need to wait until the task is not completed. Let’s consider the following example. 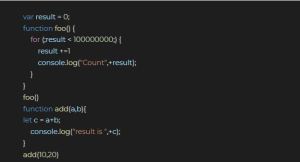 As you see, the function foo() is executed for loop up to 100000000 times. The main thread will be occupied with this task and it will ignore other client requests. To solve this problem we use worker thread. 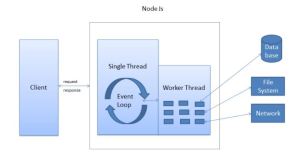 Let’s check the implementation of the worker thread from the following example.
1. index.js 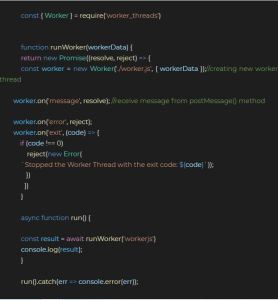 Some are event of worker threads

This file is boosted by worker thread as we already defined in the worker constructor. worker.js file is parent execution of worker thread. In worker.js file, there are two main parts -Â  workerData and parentPort. Worker data access the data from the thread and parent port will be a message port enabling communication with the parent thread. To send data from parent to worker, postMessage() method is used. This will send to the message event in the main thread.

Some properties of worker thread

Conclusion
With worker thread, we can accomplish a much more productive application without making a halt circumstance. This is the way you can import the worker thread in an application and carry out the thread. With the proper thread support, we can foresee more engineers and developers from domains like AI, machine learning, and big data begin using Node.js.