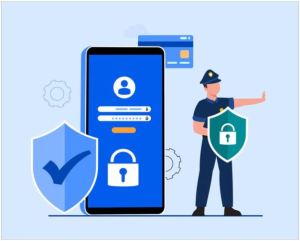 Cross-site scripting (XSS) lets attackers inject client-side script or malicious code into web pages that can be viewed by other users. This sort of attack mostly transpires via:

To block XSS attacks, we must stop users from entering malicious code from the DOM. For example, an attacker might enter some script tag to the input field that might render as read-only text.

We should always transform untrusted values, provided by an external user, into trusted values using DomSanitizer. And then bind that value to the inner HTML attribute, passing the HTML string to the service method to get a secured value.

There are two types of methods: sanitize and bypassSecurityTrustX. The sanitize method inspects untrusted value from the context and turns it into a value thatâ€™s safe to insert into the DOM. 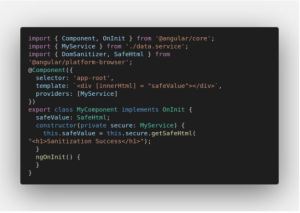 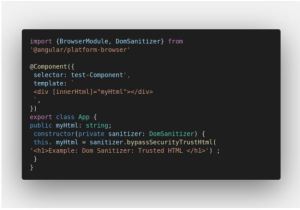 It’s not rocket science to understand that security is one of the most essential elements of the business and that holds for software development, as well. Simplistic strategies for security can limit the swindle of your economy by glitches and bugs.

It is very obvious that the errors, bugs, patches, or any other mishappenings can’t be isolated from the software or framework. But with fitting security practices and some precautions, you will be capable of tackling the obstacles and implement a more reliable digital solution for your users.