An Insight into Software Testing Strategies

Wouldn’t it be fantastic if engineers could successfully code the first time around a software piece, and there were no defects? And the software running like a cake forever? The development would be faster, and customers would be at ease that everything would always work â€“ just the way it is supposed to. 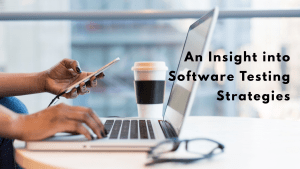 Well, this situation is no different than a unicorn trampling the road. Isnâ€™t it?

Software testing isn’t simply about bug prevention: it’s a strategic task now. Quality is a concern for everyone in the modern development shop, considering the potential impact of poor quality on a whole project pipeline. For software development teams everywhere, the requirement to ship code faster is crucial and hence it becomes even more necessary to put very stringent Testing strategies in place.In this article, we will learn about some of the most tested-and-tried software testing strategies.

How can we thoroughly test the software?

There has been much study to determine the core causes of software start-upÂ failures. One of the key reasons for such failures was insufficient quality assurance while developing software. The main aim of conducting strict quality assurance tests is to prevent poor-quality products from being released. Small mistakes that slip might lead to significant financial losses.

The solution to generating high-quality software is to implement effective QA management which gives bug-free products and procedures.

We have listed few tactics below that are essential to assuring the lowest amount of defects software shipments can carry, therefore let us look at the fundamentals of each one.

In unit testing, we test a single code module or function. This is a tiny unit (funnily enough) of code that (normally) performs a singular task.

We might have a function, for example, to see if a new password is longer than 8 characters. We need 4 test cases to test whether the function performs as expected:

Integration testing is when we assemble and check those various components of the code function together. This is commonly the case when an engineer works on a certain area of the code and wants to test if the project works correctly.

Integration testing is made much easier if developers are using APIs for various sections of the code. You can therefore have a central API module and another part of the code with its own API â€“ and both can communicate solely through these methods.

This is where we test the software itself against the customer specifications to ascertain it does all that it is supposed to do.

For example, a functional requirement might be â€œThe system will play an alert if logon is tried after 7pm.â€ If conditions are crisp enough, then this should be simple enough.Â

But take a glance at that condition. It does not tell the tone of the alarm, the sound level of the alarm, and where the alarm shuts off. It also doesnâ€™t state if 7 pm is in a specific time zoneâ€¦

A non-functional specification (possibly even part of a Service Level Agreement) might be that the system has a response time of <100ms, irrespective of the user load. This would require to be tested in a simulated setting.

If developers are picky and irritating during the specifications gathering phase, itâ€™s just because requirements need to be that precise so that software improvements arenâ€™t needed after validation testing.

Acceptance TestingÂ usually evaluates if the user is satisfied with the product and does what they desire. This includes a beta-test with the customer to see if they’re happy with the product.

If not, the software may be redesigned for compliance with current needs, or if defects are discovered.

There is so much more to testing!

The key to remember in testing methods is that all the following tactics are part of the testing process. It can be quite difficult to construct trustworthy and usable software without it.

If you are seeking a development partnerÂ to build trustworthy software for your company, contact us to discuss how we can build your project!! Or maybe you want to join our team if you’re a developer who recognizes and employs the best testing methodologies.